David Ziskin is a retired Seattle police officer. He offers career advice to new police officers from his qualified perspective – The Street.

This is my Amazon Review of David’s book, The Real Police. 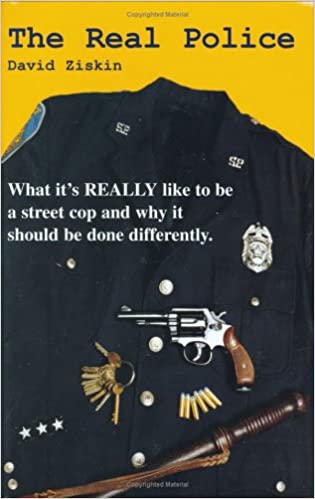 “The Real Police is proof that the similarities among police officers and their departments far outweigh their differences. David Ziskin and I began our police careers around the same time; however, we were three thousand miles apart, and we never met. It’s difficult to keep this review brief, because The Real Police is deserving of extensive praise.

David Ziskin is an exceptionally good writer…a circumstance which places this book firmly in the “page turner” category. As you read The Real Police, you’ll lose track of the fact it’s a work of non-fiction. David’s use of character profiles, and the conversational tone gives it the feel of a novel. But…make no mistake, there’s nothing fictional about this book, and its title is most appropriate.” ~ Barry M. Baker

Look for the Monster

Forest Theatre on Garrison Boulevard had a deal for kids on Saturday mornings. For the princely sum of 25 cents you could see a double-feature horror movie show, complete with cartoons, newsreels, coming attractions, and a couple of serials. You could get a box of candy for a nickel.

Times were pretty good for my family then, and my mother would often give me thirty cents or even thirty-five cents for this purpose on Saturday. To attend this day-long festival of 1950’s movie schlock with a friend was a great treat. It was a simpler time. If you could forget the Cold War (as I could), the post-war period was a peaceful, prosperous time. Then, as now, fun was at the top of my agenda.

The horror movies ran to a pattern. A boy and girl were on a picnic in the country when the aliens or giant spiders or radioactive crustaceans or whatever menace appeared. They ran into town and told the sheriff, but he wouldn’t believe them or go with them to see the monster. Neither would their parents or various other adults, and the monsters were unimpeded and undiscovered by the community for quite a while.

I used to think that when I grew up and became the sheriff, I would always look for the monster. After all, parents, grocers, truck drivers, and whoever else was not law officers. The sheriff should respond differently. Besides, in the movie, it was always a small town out in the desert. Did the sheriff have more urgent business? An invasion of the planet would almost certainly be considered a priority one call in the jargon of today’s computer-hindered dispatching.

Well, I never became the sheriff, but I was a street cop for many years, and I will now tell young readers a universal truth about police work that you probably won’t learn elsewhere certainly not in formal training or from an administrator in police work. Real policemen work the street. You can take it to the bank. The street, simply put, is the soul of police work. Everything else is a hiding place or a support function. Now, you doubt me. Thirty years from now, you will know I’m right.

You can tell how advanced a society is by the way its police behave. Street cops get there first and make all of the important decisions in police work. Everybody else is in the background, despite what you see on television. The first cop on the scene represents our civilization and our system of laws. He or she is a living symbol of the Bill of Rights and of society’s attitudes regarding both law breakers and the vulnerable.

I answered hundreds, probably thousands, of calls from people reporting strange things, like little people from Venus in the basement of the house, and I always looked for the monster. I never actually found the monster, but I always looked before I asked the complainant if they had run out of their medication.

Delusional people, apart from the pathology of their illness, are not illogical. Nor are they insensitive to the way they are regarded and spoken to by others. They may look bizarre and they may say and do things that we would not, but at some level which they may not express, they are keenly aware of how they are treated. Listen to them for a few minutes, and look for the monster. Then, and only then, ask about their medication and the status of their psychiatric care and so on.

This principle works in other situations too. One night I responded alone to a domestic disturbance. This is not a good idea, but there were no backup units available, and a citizen had called for help. If you needed help, would you rather see one cop, or no cops? These are street decisions made by real policemen on the street, not by a committee of people who don’t want to do police work themselves.

The disturbance involved a married couple, but there was no assault. They were both alcoholics and both pretty sad cases. I stood in the kitchen and listened to each of them in turn. Tactical note: The standard method on domestic disturbances is to separate the principals, but you cannot do this without a backup unit. Also, the kitchen is a bad place to work a domestic; too many knives and heavy pots and pans and other hazards, like maybe boiling liquids. But everything important gets discussed in the kitchen, in dysfunctional families as well as normal families. Sometimes you have to play it where it lays.

The couple was not really drunk, but they had been arguing about their situation and had called police, because the police are the default social service agency for broken people. The woman spoke first, outlining their troubles together. Then the man began to speak, but I didn’t know what to say. I was not a marriage counselor, or an alcohol counselor, or a mental health professional, or anything else but a street cop. I was appalled at the sad wreckage of their lives and couldn’t even think of anything non-committal to say, so I just listened and made a sympathetic noise once in a while.

The Monster in His Head

The guy was pretty articulate, so I let him continue. I was looking for the monster, you see. Only, this guy’s monster was not in the basement. It was in his head. After maybe ten minutes, he began to cry. He shook my hand and thanked me for coming and for helping him. How, I wondered to myself, had I helped him?

In a little while, both of them said they felt better and that they thought they would be OK. They thanked me again and again for coming. I cleared the matter with police radio and took the next call. Some nights, the city’s agony is continuous.

You know what? I saw the guy again, maybe a year later. He was in a group of drunks arguing in the parking lot of a tavern. I was the second unit in on the call. As soon as he saw me, he told the other drunks to shut up. He pointed to me and said, “This man came to my house and helped me when I was in trouble. I won’t argue with him.” And with that, the disturbance was over. Every encounter you have is an investment. Treat it that way.

Want to know how to be a good cop? Start with the following statements. Write them down on a card and carry them with you. Read them periodically. In thirty years, you will thank me.

Career Police Officer is an Amazon Associate and receives commission on qualifying purchases.

Find schools and get information on the program that’s right for you.